Geez, I come back from China and I've completely forgotten how friggin' warm La is so I knew exactly what I needed. Wine Slushies! And yes, I know that alcohol dehydrates you so just remember to stay inside with the air conditioning.  *grin*

I had my first wine slushie at Sterling Renfest when visiting my friend Rin in upper state New York about two years ago. Or it will be in August...Geez, it's been way too long since I've visited Rin. I'm sorry Rin!!! *cry*

Anyways, my boyfriend, A and I were wandering around, trying tasty treats and just enjoying the day with Rin, her husband EJ, and their son Shrimpy (Not his real name....or is it...bwahaha). They hadn't had a ton of food exposure outside of their respective cultures (Rin is Canadian married American, EJ American but with some below Florida flavor if I remember right. Rin was also the one who introduced me to Poutine...oh god poutine. Such a sinfully wonderful comfort food...tangent, kitty...tangent. *cough* Sorry about that...) or so I'm led to believe considering her 'shock and awe' act every time I make something I consider fairly normal.

Anyways, we were trying to cool off in the unbearable heat and they were handing out samples of slushies....oooh...Then we found out they were wine slushies and Rin and mine's inner LUSH came out. Hehe. We tried both the white wine and the red wine, finding the white wine one superior. The red wine was just tooo much for us even more so than usual. But the white wine one was delicious. So we relaxed, ate our wine and A made silly faces at the baby (He makes silly faces really well.)

So as the Heat Index keeps climbing this year, and this redhaired pastry chef kept frying, I kept thinking about those slushies. I have very fond memories of that Renfaire (It was the first time I got a public kiss from A *grin*) and of those wine slushies. So I decided to recreate it.

Obviously, it has to have wine. But what wine? I debated for a couple of weeks about what wine to use but then it found me. Currently, I'm working as a demolady for a promotion company. But as it's mostly demonstration for alcohol, it gave me a perfect excuse. Since I have to...ya know, try the wine so I can tell people what they're good for.

Sometime last year, I got to try a Moscato wine, which is a really sweet but not too dry wine and it reminded me of the wine slushies again, so I knew I'd found my wine. But earlier experience (aka trying to freeze alcohol for granitas in culinary school instead of remembering my high school chemistry...which I almost failed;The chemistry not the culinary) had shown me that it wasn't just wine. Now anyone who has tried to speed chill alcohol knows that alcohol doesn't freeze too well unless the sugar content is really low. I've exploded wine bottles before (It's not pretty). Two things cause this. Sugar content and alcohol content. Wine has a relatively low alcohol content, so it freezes pretty quickly. But we don't want frozen frozen we have to pick it apart with an ice pick so that means unless we want to alter the actual taste of the wine, we have to increase the sugar content. And we do that by adding grape juice concentrate. So anyways, onto the recipe. 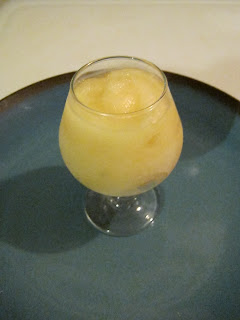 Difficulty: So simple, a slush could do it. And I often do. *laugh*

Basically, just let your juice defrost inside the bowl so it doesn't drip all over your counters. (I usually open up the top and set it up upside down so I can mix the wine with the juice before throwing it into the ice cream maker). Set up your ice cream maker (ie make sure that it's actually ready to make ice cream or the like such a freezing it the night before) so it's ready to go as soon as you grab the canisters. Once the grape juice is liquid, add it to the ice cream maker. Then add the wine to the bowl until it just to just below the top of the mixing blades in the ice cream maker and mix.

Set up and let it start churning. I'm not including the ice cream maker instructions since there are many different brands. However, it works best with the more modern types of ice cream makers. The ones that use salt aren't as efficient or effective.

Now, if you have a second canister for the ice cream maker, my preference is to use them both. And after the first one has gotten to the 'done' stage where it's not that cold, I dump the contents from the first canister into the second canister and let it go again. After it's done, either once or twice (The second time around makes the ice crystals very smooth but it is by no means absolutely necessary), place the mix into a freezable container and throw it into the freezer for a few hours.

Neat little trick? Throw it into a freezer bag instead and then when it's ready to pour (Do this only if you're going to use the entire bag in one go), snip off one of the bottom tips of the bags and you'll  have an instant pastry bag to give it a kind of style to it all since the slushie will hold a little bit of a shape. Nommy!

Side note: Now, you might be asking why the extra grape? This is your added sugar content, without the extra (and different) alcohol content. This will keep it from freezing solid in your freezer too quickly. Not that I really expect you to keep slushies for too long before they're devoured. But as it is white grape juice, it's a similar enough flavor that it doesn't affect the taste of the wine that much.

However, this is where I believe a problem came in. As yummy as the wine slushies were, that red wine slushie at the fest overwhelmed our taste buds and I believe that was because of the tannins. Tannins is what makes red wines bitter. That strong flavor that most reds finish with. I believe that in their recipe, they used white grape juice concentrate with the white wine slushie and normal grape juice concentrate with the red. But normal grape juice has that SHARP tannis flavor too, and freezing anything concentrates sugars, making the flavor even more sharp. Hence why my recipe goes with frozen white grape concentrate for both. Babies don't like sharp flavors, which is why most babies prefer the white grape juice to regular. I just followed the same logic.
Posted by Tabitha K James at 8:00 AM