I love strawberries and even though they are technically out of season in Louisiana isn't going to stop me from eating them. And I found out today that one of the theme carnival I've wanted to jump on board of was having the theme of strawberries this month, I had to join in. I have no idea what I'm doing but I'm going to try, right?

So one of the staples of my kitchen is an amazing recipe by Linda of Gluten Free Homemaker. She's also the one who's doing the carnival. It's for a Focaccia bread/hamburger bun and I've been using ever since the first moment I found it. I even commented on it so you can see how long I've been using it and making it. I average at least one batch a week, I believe and use it for everything, sandwiches, pizza dough, etc, etc, etc. This was my first batch ever. Before the Muffin Rings came in the mail from wonderful Amazon. Not very pretty, but oh so very tasty when I hadn't had any kind of bread in about two months.

But the reason for this particular recipe stems from the fact that one of my signature dishes from before I was GF was a Sweet and Sour Shortcake Recipe. I needed a sweet bun, but one that could absorb the flavor of the vinegar and such. Things simmer and stew in the back of my brain forever if I have the time to let it. I mentally cook something about twenty times before it ever reaches the stove if it's not an impulsive thing. The cake I'm planning on for my best friend's wedding has already gone through about four incarnations and she's not even technically engaged yet.

You know how when you're sick, things sit and stew in your brain becoming all sorts of delirium, especially when you're REALLY sick? Well combine that with my generally stew-y nature (Hmm...stew sounds really good right now, but...oh wait, tangent again ) I should either never be allowed to cook while sick, or I should always cook while sick because the fact is, I can't follow a recipe worth a darn when I'm sick but I usually come up with a pretty sick (as in really good) screwup that works amazingly well for what I'm trying.

This is what happened when I brutalized Linda's recipe one steamy March night in Louisiana when I was feeling a bit loopy. See, when I'm sick, my brain remembers more of my culinary training than I do and I don't have any silly hangups about doing things the 'right' way and just do what seems intuitively right. Linda's recipe is amazing but what I wanted that night was a sweet bun designed for yummy fillings that made my sweet tooth happy. I have mentioned the ball of yarn, right? The one that tells me things? I listen to it far too often.

So in listening to that ball of yarn...I present

Difficulty: Sweetly simple with a Sour Twist (Aka not too hard but a lot of steps in some ways)

Time: 2 Hours total. Most of which is resting and baking.
Feeds: 8 Healthy Portions

For the Biscuits and cream:
Mixer (preferably stand) with Paddle and whip attachment
Mixing bowl (No bigger than medium needed)
Bowl Scraper/Spatula
Muffin Rings (For a more rustic look, you don't have to have them)
Double Half Sheet pans (Or a pan with a airpocket to help control uneven heating)
Parchment paper
Ice cream scoop (#3 is my preferred size but can also just spoon it out)
Oven
Optional: Half Sheet pan lid or pan topper ( I'll explain below)
Optional: pot of boiling water
Optional: Pan rack
Optional: Towel
For Sauce:
1 Good sized Sauce Pan
1 Heat Safe Spoon with deep pockets
A gluten Free cooking spray


First, Add all the dry ingredients together in the mixer bowl and set to slowly mix the flours; The brown rice, sweet Rice and Tapioca plus the gelatin, gum, yeast, salt and sugar and the baking soda. Normally this recipe doesn't have baking soda, its leavening comes from the yeast, but I found that a little bit of baking soda actually gives me more of a crumbly inside that I want to help absorb all the yummy sauce.

In a separate bowl add the water, the chia water, the eggs, olive oil and vinegar. Mix it up pretty well and turn on the mixing bowl to a bit higher of a speed and add the wet ingredients. Keep it at about half speed for several minutes 2-3 usually works but if it's warmer, maybe 4 until it looks like this below. I actually tried to not add the gum into it because I'm trying to steer away from gum usage but it was just falling apart so I added at the end and mixed for like another minute beyond that. Preheat the oven to 400 F. 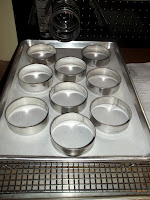 Letting the dough rest for a moment or two, it's time to get out the pans. I have NEVER run into an oven outside of a commercial oven that actually cooks evenly so I prefer to double pan all of my pans when it actually matters. Baking biscuits, cakes and breads do matter so they get the double pans. I place a piece of parchment up on it and place the muffin rings on it. I get between 9-10 biscuits for this amount of dough. 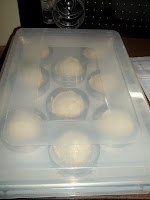 Then I place the pan lid over them. This doubled pan is also where the pan rack, boiling water and towel come in. After the lid is over the biscuits, I place the boiling water in a third pan which has a rack in it to place the doubled pans so I can just slide it off come baking time. This helps to control the amount of time I have to let it sit and it's almost a perfect 15 minutes every times for rising just the right amount I need.  Place the towel over the top to keep extra heat in (have I mentioned I'm a control freak yet? I like things to be able to be replicated even in my sick-y mind. I think I'm so much a control freak that it's permeated my entire being and so my sick brain knows I'll beat it up if I can't repeat something it did. *grin* Anyhoose) You don't have to do this, you can just let it rest, I just find this does its job consistently which I like. 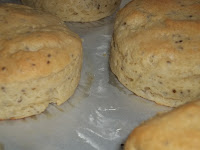 Slide just the double pan into the oven and turn down the heat to 375 or 350 depending on how brown you like your top. With the additional sugar in my recipe versus Linda's the bottoms brown kinda easily so you don't want it at quite 400. It should take about 15-20 minutes. Her recipe calls for about 15 minutes, but since our temp is lower, we still need it to cook. At 20 minutes it should be very lightly brown. See?

Let them rest and cool to room temperature fully. This will take about 20-30 minutes. Then it's time to cut up the strawberries. There's no real way to get strawberries the same actual size so I just cut off the top so it's flat, turn the flat side to the cutting board and cut it into slices in a vertical cut. It'll take a while, about ten minutes. Once that's done, I put the vinegar into a pan, (and yes, I know acid to a metal for long term is bad but this won't be long it just cooks the items better.)

While that's going on, I go ahead and whip the cream, sugar and vanilla together to get a heavy slog as my mum and her dad call it. Letting that sit for just a few moments, I throw a bit of sugar into the vinegar while it's heating up. Just use about a low medium heat (a 3 on an 8 heat stovetop) and stir it using the heat resistant spoon. When you can't hear the sugar scraping along the pan, it's ready. Toss in your strawberries (most pans will only fit about 1 lb at a time but you can reuse the sauce, just adding a bit more vinegar and sugar to re-situate it).

Cut open the cooled biscuit bread with a fork for a nice English muffin like texture so it can soak up some of that wonderful sauce as well. The flat is not bad by any stretch. But I love to soak up sauces and rough edges do that better.

If using just the whipped cream, I put some of the strawberries and sauce on the cut biscuits then slap on some slog and voila, all done. But if I'm doing Ice cream like A prefers (him and his sweet tooth), then I put the ice cream on first, then top it with some cream and then slather it in Strawberries with a bit of sauce. Normally we share with our neighbors but they weren't home so our dessert today had a few more strawberries than normal. That's ALL strawberries under the cream in this picture. 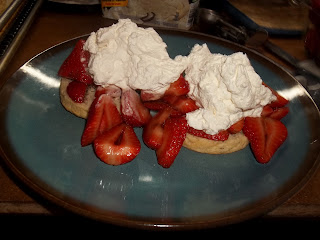 Anyways, a great big Thank you out to Linda for the wonderful start to my Living Fully way of life. And I'm sorry for murdering your recipe. Actually, I'm not, it's still awesome...just different.

Yum! It looks delicious. This is a great recipe to play around with. I'm glad you used it for your signature dish.