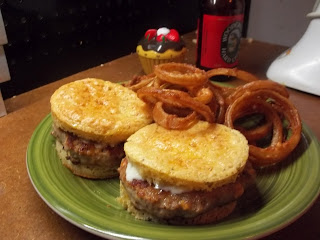 Well, despite being in the middle of the Hurricane Isaac path, I have enough going to actually post up a recipe. Determination for the win! I am however, going to keep it fairly simple. I worked on this recipe amdist preparing for the Hurricane and everything else, but we were responsible and paced ourselves from the first time we heard about it all. I had A taping up the windows just in case one of them shatters and taking care of our babies (Ie Kitties) while I tinkered away at the recipe. It took three tries before I was happy. I liked the flavor of the first one, but it seemed too dense. I wanted light.

Usually, I go to the Linda the Gluten Free Homemaker recipe for Gluten Free hamburger buns and while they are FULL of flavor, I was really wanting something a bit lighter still. So I poked around the internet and nothing looked quite right. They either completely relied on rice flour or even worse, they did it by cups! Nothing wrong with rice or doing it with cups, but with gluten free recipes being what they are and trying to get back to my pastry school beginnings, I wanted a more 'certain' product. But I was going to try some different recipes and see what I liked about them, and see if I could figure out how to make it more  to my taste.

I'll tell you, some people may say they came up with a recipe on their own, but it's rarely true. You have ideas of what this person did that worked well, and this other thing that happened that you liked. Things and people adapt and create new and wonderful things, and today was no different. First I tried the Food Philospher's recipe and while I loved the flavor, it just wasn't as fluffy as I wanted but I liked the texture, so I tried Carla's Gluten Free Recipe Box. but making them, I did discover what I liked the most.

I've noticed that potato starch and egg whites give me a lot of structure and porous texture, which I personally like.  But I also want something a bit soft and pliable. I want it to have give and to soak up the grease on a good burger.

First lay your parchment down on your sheet pans and put your muffin rings or the like onto it and spray it with your cooking spray. If you're using something like a muffin top form, ignore the parchment and spray. First and foremost, scald the milk. I do this the easy way and heat the milk in the microwave for about 45 seconds to a minute. Then let it cool to 105F or so. Too hot will kill the yeast. You can put the honey into the milk but don't put the yeast in until you have confirmed that it's cool enough. 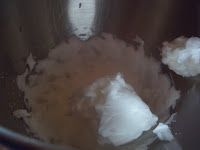 Now, take the separated egg and whip it to a firm peak in the mixer on high. I will often use cream of tarter just to make sure the whip is firm but that's up to you. Once it's firm, I will check on the milk and if it's cool enough, stir in the yeast. If not, give it more time by drying mixing the flours and starches together in a separate bowl with a whisk. Stir the yeast in and let it sit. The honey and the natural sugars in the milk will get it going just fine in about five minutes and it gives you time to do other things. Like preheating the oven to 175 degrees. I don't do this step, because I've set up a small proofing box of my own for my kitchen but if you don't have a nice warm place to proof the dough, do the oven proofer. 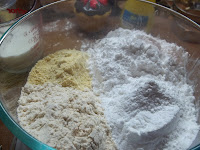 Boiling the water will also help pass the time. I just throw it in the microwave for about a minute and scoop 2 tsps out of it and into a small pinch bowl that I've already placed the chia seeds and flax seed into. Once the yeasty milk is ready (this is dry instant, so you don't -have- to proof it, I just like to make sure), keep the mixer going on low and add the yeast milk, the oil, vinegar, egg and chia seed/flax seed mixture and let it mix until it's a bit slushy. 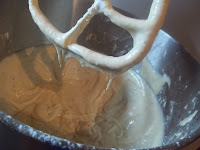 Then add the flours and guar gum and mix on high speed for about five minutes until a soft nape forms. It looks like the dough is tearing away from the paddle. 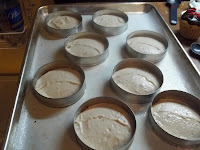 I then scoop the dough out into a piping bag and pipe it into the muffin tins, you can also use a scooper or spoon. I spray it again with the cooking spray and put it in my proof box. If you're using the oven, turn the oven off and place your pan into the oven for about 30 minutes or until doubled in size. Now, you'll still have a left over yolk at this point. Add just a bit of water to it and mix it up. When the dough is proofed, very carefully remove it from the oven and preheat the oven to 375 or already having done it if your kitchen is warm enough to have proofed it without the oven. Brush the yolk mixture LIGHTLY over the tops of the dough and sprinkle with sesame seeds. The dough is very fragile at this point so be careful with the brush.

When the oven is preheated, place pan in oven and bake for 20-25 minutes or until golden brown. Remove from oven and forms, placing additional sheet pan or some form of covering over the top to steam the bread a bit soft until it cools on it's own. Cut with a serrated knife and enjoy with your favorite sandwich or burger. 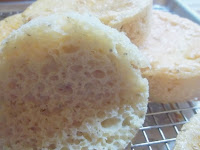