When icky weather comes, I have a few recipes that I fall back on. But I am notorious for not ever doing things quite the same way twice. That's why someone needs to be in the kitchen with me writing everything down or I'd never be able to duplicate it or tell anyone about it.

Well, last week Louisiana was having one of those "Hey, here's a hint that it might still not be 90 degrees completely year round" days and I woke up chilled and grumpy. Well, luckily, A knows to just send me to the kitchen and leave me alone for a while and I'll get over it. I was debating what to fix when my eyes fell upon the russet potatoes we'd gotten on sale. I love my reds for most things usually but I knew I needed to use the russets so I decided to just make potato soup. It was warm, comforting and just a bit easy, didn't have to make my sleep addled brain really think.

So I get out the garlic and I'm about to throw the garlic in a little oil for a quick saute and I realize I have leftovers from a pack of creole seasoning mix I'd gotten a few days earlier. That is they take the celery, onion, parsley, garlic and stuff and make it into a pre-made mix you can buy in the produce section. So I saved myself some trouble and sauteed that  and added some extra garlic for the heck of it. Once I got it going through, my brain perked up and went...I want to do something different. This is the time to fear. Because those words usually signal either something amazing or something horrifying. When it came time to add the cream base to the soup....I threw in blue cheese dressing. And just that simple, a nice sharpness  swept through the soup and spiked it with just enough energy to be a bit of a perk up and go and it was amazing. It isn't going to last long around here, I can already tell.


Difficulty: A few techniques are required, but simple.
Time: About an hour
Note: The celery, bell peppers, garlic, parsley can be subbed out for a portion of creole seasoning mix if you happen to have it in your neck of the woods. The amounts aren't really exact with this recipe. It's up to you and what you feel like.
Mise en Place
Ingredients
I find this all easiest to do to make it as much of a one pot meal as possible. Wash and chop your potatoes and place them in the large bowl. Make them about twice as big as you want the chunks in your soup to be. If you don't want it chunky, make them about an inch, we can take care of the chunks later. Don't remove the skins unless you really have to. It makes them so tasty! 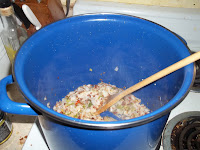 Chop the celery, onions, parsley, and mince the garlic if it's not alreadyTake your pot, spread a little oil in it (adding bacon if you want to and of course, who wouldn't want to) and turn the heat up medium.Once the heat is ready, throw in your chopped vegetables (not the potatoes) and sweat them. A little tangent hear. Sweating is similar to sauteing but you're not trying to brown the items, you're just wanting to bring the moisture to the surface of the vegetable. Salt will help with this as well. Back to the point here. Basically, the oil should be hot but not sizzling. If it's too hot, you'll notice when you throw the vegetables in. You should here a gentle sizzle. It shouldn't be loud or popping all over the place. Sprinkle a little salt to help with the moisture draw.  Keep the food moving!

Add the garlic and parsley. and cook until the onions are almost but not quite see through. They'll look like they are really shiny. Once that's done, lower the heat to about low-medium and add the potatoes. Cover with the broth/water until just covered or just the water till just covered. Then add 2 tsps of the Better than Bouillon (or to taste). Don't add a lid but bring the water to a boil, stirring occasionally to make sure that the bouillon or broth/water is mixing well and no potatoes are burning on the bottom. After adding the bouillon you can also turn the heat back up to medium. 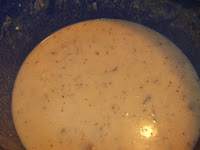 Once the potatoes are boiling, take a slotted spoon and bring a small piece out, run it under cool water and taste it to make sure that it's cooked through. If not, leave it at a boil for a while longer. While this last part is taking place, take that bowl you'd had the potatoes in earlier and place the sour cream, yogurt and blue cheese dressing. Whisk it all together. 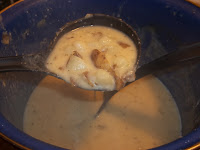 Lower the heat down to the low temp but not quite keep warm. Remove about half of the potatoes from the pot and strain out the broth (if you want it chunky)Now taking a ladle, whisk some of the potato/broth mixture into the cream mixture a little at a time. Try to make it mostly broth if possible. If you want it smooth, leave all of the potatoes in. Using the hand blender, blend the desired amount of potatoes smooth. Add back any chunks and stir well.  This will help the cream not to break up when it's added into the main pot. Do this three or four times to get the temperature of the cream up. 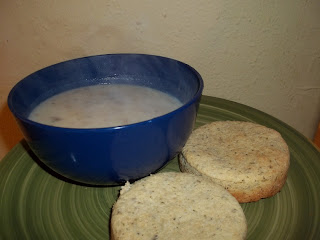 Then still whisking, add the cream mixture into the potato mixture and stir. Then add the shredded cheeses until they are all nice and melted in. Soup is done. Spoon into bowls and serve with your favorite gluten free bread (my favorite recipe coming soon)
Posted by Tabitha K James at 8:00 AM