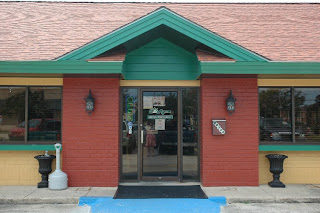 I absolutely adore this place, for reasons sentimental and practical. And to think, I never would have discovered it, if it hadn't been for some really bad customer service from another place. In Hammond, there are pretty much just three established 'authentic' Mexican restaurant from what I can find. La Carreta, Adobe (Also owned and operated by La Carreta), and El Agave. I'd been having some issues with La Carreta's lately; as a college student I don't have that much money to spend on eating out, but sometimes I just needed a dose of salsa and chips and so I would buy a bag and a thing of salsa from La Carreta. However, despite that I'd been buying said bag of chips and salsa from them for going on a year, it was rare that I got charged the same price for them on a subsequent visit. It all depended on who was ringing me up.

Don't even get me started on how badly they ALWAYS messed up my order when I bought real food. Every single time something was wrong, from missing items to cold food.

So when A(the boyfriend) and I decided to go out to a nice Mexican place, we decided against La Carreta's and instead went to Adobe Cantina, which we found out was also owned by La Carreta's. That wouldn't have mattered so much except that when we went at 9:15 at night (They closed at 10), we were told that they wouldn't seat us, as they were closing early due to lack of business. They told us this while an entire table of 6 people sat off at one table and were just then placing their orders.

Luckily, we didn't have to travel far, but just imagine if we'd been out of towner's visiting and wanted to stop by, how that would have gone over. Well, that lost them our business and we found El Agave the next night.

We were quickly seated despite how busy it seemed and our waiter was extremely attentive, but also knew when to just leave us alone. This was a bit of an emotional dinner as A was leaving the next day to fly back home for the semester to come. We ordered the Combination Fajita for 2 with the Chorizo sausage, along with some queso for the chips. Everything was delivered really quickly with an appropriate warning about the heat of the plate. There was no questions when I asked for extra tortillas or anything.

Everything was delicious. The sausage was crispy yet perfectly done on the inside. The tortilla were warm and not stale. Folded without cracking. Lots of filling to smear all over. The drinks were refilled quickly and unobtrusively. Lots of napkins. The steak still had just a perfect hint of pink in it so that we could tell they weren't overcooked. We weren't rushed through our food even though it turned out to be a busy night. We couldn't have asked for a better experience.

And apparently we hit them at the right time, as they had a live mariachi band that took requests. We couldn't figure out what to ask them for when they came by, but they picked a wonderful bittersweet song that talked about saying goodbye to a love. All in all, it was a magical evening and well worth every penny. But what I found even better, the entire dinner only cost us $35. A large shared entree we couldn't finish, the extra cheese and tortillas, and drinks.
Posted by Tabitha K James at 8:00 AM