The best part about being a geek, at least for me, is using what's on hand to make whatever you need, in the most economical and efficient way. You know, the way things 'should' be run. You don't need to have the fanciest means of doing something, but it should still be done 'right'. By right, I mean the value of it. Yes, I can pay $20 for something, but if a $5 something will get the job done with only five minutes of tinkering? It's worth it to me. And that's the center point of today's recipe.

I have an economy brand of rice cooker, since it's usually just me and A when I make it. But I was really in the mood to use some of my huge bag of rice that I always have on hand. A and I were discussing if we had a chance to travel anywhere in the world, where it'd be and why. This brought up Spain as one of my foodie travel places. He couldn't think of anything that was notable in Spain (sacrilege) and so I mentioned Paella. He asked what it was about and I described it to him and he just didn't get the point of Saffron which doesn't (Don't let anyone lie to you about this) really enhance the flavor of food that much and yet is so expensive. So I decided to show him.

I had a container of Saffron that I got as a present from my mum. Saffron, if you don't know, is the most expensive spice in the world by weight. That's because it's made from the stigma of a flower. Each flower only has three stigmas, and the stigmas have to be hand picked. Hence the reason for the expense. It add a beautiful rich color to the rice that's much like some of the box risottos but is obviously more natural.

But I wasn't up for making Paella itself, so I decided on Stir Fry, since I'd been craving Chinese for a while. Hence, today's recipe. Besides, I'm currently in China so it's theme appropriate, right? 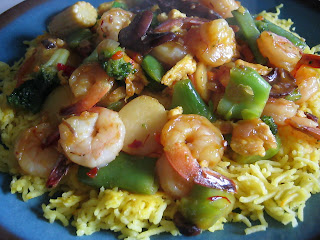 Difficulty: Low Medium (Not difficult, but several steps kinda like the Great Wal---nah, who am I kidding, that thing is a killer, this is not.)
Time: With preparation about half an hour
Mise en Place
Ingredients
This is a recipe with many substitutes. You use what you want and worry about keeping it moving. Anyone can make stirfry.

First things first. Set up the rice to cook. In a rice cooker, it'll take like 20 or so minutes. Which if you have everything precut is just a perfect amount of time. I'm not going to tell you how to make rice since I think a rice cooker should be a household requirement plus its just a mess to make on the stove so you can do that on ehow.com or something. While you're rinsing the rice (And you have to do this several times) I've found it's a lot easier to drain the water out with a sieve. Like this. Then dump back into pot and back again until water when swished around is mostly clear. Then fill to your rice cooker's line for the amount of rice you're cooking. Add in the saffron and stir around a little. You might even see little tendrils of yellow coming out. Not a bad thing. It does tend to turn the rice yellow.

Also, turn on your stovetop fan if you have one. Things might get smoky. You'll be working with high temps. Now, in your pan or wok, put a little spread of oil in. Let it heat up to a really hot temp. I'd say at least a 6 on an 8 measure stovetop. Or a 4.5 on a 6 measure. If you drop a single drop of water in and it starts sizzling immediately, you're set. Slide in your pineapple from your side. This will keep it from popping onto you. Oil and water don't like to mix. Move it around with your wooden spatula. Then put in the shrimp, chili sauces and brown sugar making sure to keep everything moving. This is going to cook your shrimp. Cook it till it's just underdone and remove all off to side in a bowl set up for this purpose. 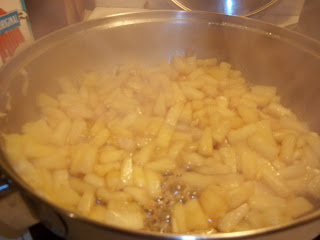 Add a bit more oil into the wok/saucepan and let it heat back up again. Add all the veggies which should still be frozen(except mushrooms and garlic but add them too). Again, the water and oil won't like each other so add it in so it won't splash up on you. Keep it moving. This is the single most important thing about stirfry. You have to keep it moving. That's how you keep things evenly heated and everything is yummy. Now if you have broccoli in your stirfry, this is a good time, cover your stirfry with another pan or a lid and let it sit for about 30 seconds at a time before moving it again (this is so stuff doesn't burn) Do this a couple of times but keep in mind that stirfry is meant to be fresh and with some strength to the food (Al dente - to the tooth), it isn't supposed to be mush. Once you're satisfied with your vegetables, throw in your sauce and shrimp and toss the wok/pan around to get everything nice and coated with the sauce.

By now, hopefully, the rice is done and you can move the rice around to thoroughly get any yellow liquid that hasn't dispersed into the rice. It has a distinct smell to it that is very nice and the bright yellow color is gorgeous. Scoop out onto plates, cover with stirfry and enjoy.

The spoon is a lie.